Welcome to the USS Victory !

The year is 2391, Starfleet is in the midst of exploring parts of the Gamma Quadrant now that it has been over a decade since the Dominion War ended, the Dominion have retreated back into their own Space and very little has been seen of them since then. Starfleet has continued to explore the vastness of the Gamma Quadrant. The fleet has expanded to meet the scientific and exploratory needs of the Federation and maintain Dialogues with the many Allies it has encountered.

Not all is entirely peaceful. As the fleet expands out, exploring new sectors, a signal is detected, determined to originate from a species that records indicate hasn't been seen for centuries. With Starfleet undeterred in their exploration efforts, time will only tell if a confrontation will occur. The only questions that matter: How? When? Where?

USS Victory has become the latest Sovereign Class Starship to be launched into the Fleet and with news of this signal coming to the surface and scattered reports of unidentified Aliens spotted in the outer Colonies it is time to investigate.

Only the best and brightest can solve this mystery, do you think you have what it takes?

Her Motto? "per aspera ad astra" - Through Difficulties to the Stars....... 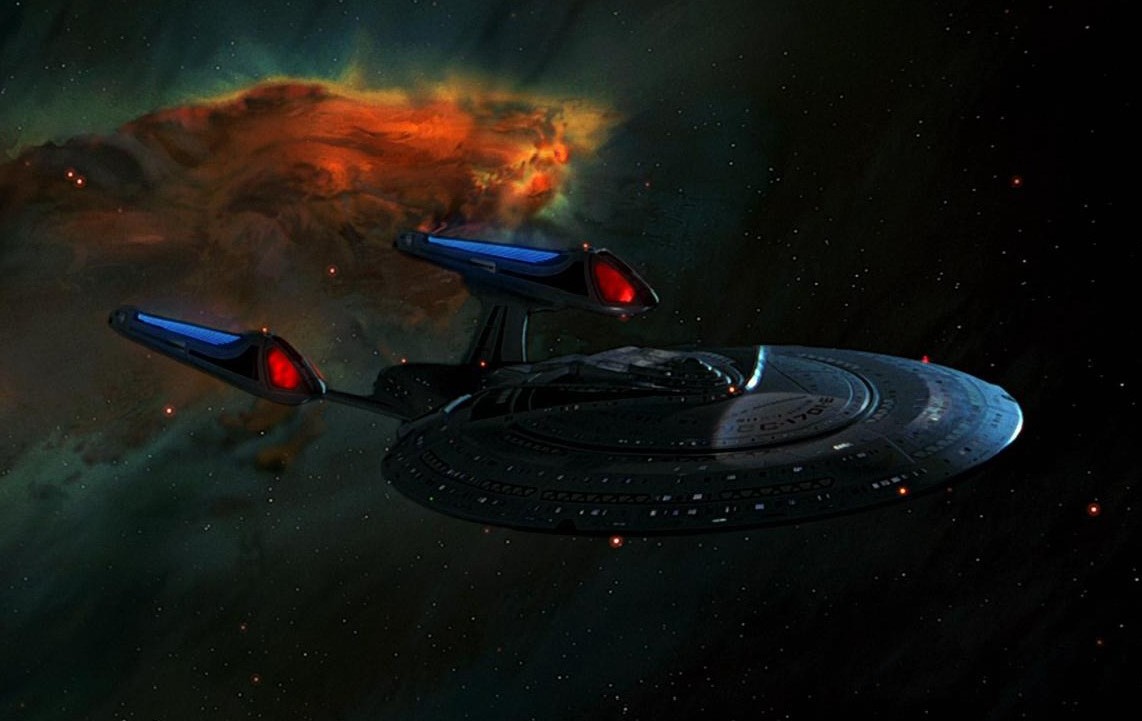 Hi, all.
momentum has died over the past two months, to the point that Brass has been in contact voicing concerns.

In an attempt to rebuild momentum and remind us of the reason we all love to write, the current mission will be interrupted (put on pause to return to later).

Everyone will do their initial landing, then return to the ship (to allow you to tie up any posts that you may be currently working on. There will be an evening spent on the ship (to allow for at least 2 side plots that are being developed)

At some point during the evening the USS Victory will receive an urgent SOS forcing us to abandon the current mission, but allowing us to return later. The new mission will give everyone a chance to use their character's strengths and get us a well needed win on the board.

There has been a bit of grumbling about the time taken to complete this mission. "Landfall" was posted Jan 22. So what has taken us 3 and a half months?

Most of these posts involve 6-8 people. We know that not everyone responds every day. Sometimes a week can go by because people are busy. If you have a post with 8 people and each take a week to respond to one particular tag, that post will take two months. That is just the math of it. So do we force everyone to log in daily? Some people haven't logged in for the last 12 days. What do we do about that?

DO we split the party and let the fast writers get out a half dozen posts while the slower ones drag out. At some point, the fast ones have to wait for the other posts.

Add to that, we have some players who start a post and then just drop out of the simm without telling us. It can take up to six weeks to find out. Do we wait for them? Write over them? Leave them out of any posts?

So, given we have, in fact, posted 17 posts in the two and a half months that have passed, we are actually moving VERY fast.

Now some of you may feel frustrated because you are "waiting" in cryo (like Bertrand). There are still opportunities to write NPC back on the ship (let us know and we can add you). Other than that, sit back and enjoy the silver class writing we are doing and be ready to respond when a tag comes.

Posted on Thu Mar 8th, 2018 @ 2:58am by Commander Bertrand Cuprum in Sim Announcement

Hi all, we are nearly finished Round 1 of the ground combat and will be moving quickly to round two, which has another twist in it. everyone get ready to write again.

For those of you who were interested in the chance of life according to the Drake equation, here is a little reading on the topic.

The Drake Equation, as it was stated in 1967 goes

When we come to look at your sample of 1900 stars it starts out looking REALLY promising.

R = 1900 (for the region we are considering.)
fp = 1 (Current theory is this is almost 1, where every start produces planetary bodies. Lets be generous and agree.)
ne = 0.4 (as of November 2013)
fl = 0.5 (No actual data exists. We have found many earth like planets but there is no way of telling if life has developed there. the only worlds we can study is Earth which has a probability of 1. Mars and Venus, just outside have a probability of 0. So I am going to arbitrarily choose 0.5, though potentially much higher.)
fi = 0.5 (as above, though we don't really have a description of Intelligent yet.)
fc = 0.5 (as above, though probably much lower.)
L = 3 Billion (Originally hypothesized as being 420, based on civilizations like Rome. I am being far more generous)

SO instead let us REVISE the equation
N being the number of Stars in the region that exist for longer than the 4 Billion years it takes to develop intelligent life. This changes R, but we will expand our area till we have at least 1900 planets available (a much larger area but our values are unchanged).
L to be the Fraction of a planets history in which it can produce signals. Our 3 billion drops to about .4, making our total now 57. We also have to allow for the period of time a civilization can HEAR the signals from another. For us this is less than .0000001, but for a the sake of completeness, lets allow .4, taking our total to 22.8 out of 1900.

This still does not factor in things like distance traveled by the signal.

For some real application:
Let us assume that out there is ET sending a phone number so we can call him direct at the speed of light. Given we have to allow time for the signal and return of any message, no individual would be likely to be able to wait more than 80 years for a reply to anything they sent, even as a very young child. That gives us a maximum range of 40 light years for meaningful communication.

We have been searching for ET signals since the 60s (nearly 8 years now) and have been generating hearable signals since 1900s (close to 120 years). That means it is unlikely there is any life within 0-30 light years of us. There may still be slim hope for a most distant civilization, but given there are only about 1400 star systems inside a 50 ly radius of earth (16 civilizations over the whole area), and we have ruled out the most close systems, our probability drops significantly. at our most generous, the chance of life is less than .007%

Great news everyone we have a new player joining us on the Victory.

Reade will be playing Lieutenant Jaxar our new Chief of Intelligence.

Please make him feel at home and help him get stuck in right away.

The three Nausican raiders moved to engage and delay the USS Victory while the remaining three ships continued their boarding actions.

Tactical supplied, "We can't open fire on the docked Nausican ships, without risking damage to the Hasak class freighters. They have already taken a beating and could just blow…

Injury reports began to pour in form around the ship. They had to lower the shields each time they transported people to or from those ships, and each time they were sitting ducks to Nausican fire.

Response teams were dispatched, and injured began to arrive from around the ship.

The first two teams had beamed away simultaneously, and now Hel, Seamus, Val and another two security officer stepped quickly up to the pad. Hel couldn't help but hear the damage that was being caused by Nausican weapons every moment the shields were lowered for transport.

» All Hands To Stations!

=A=RED ALERT! All crew to actions stations! Captain and First Officer to the Bridge!=A=

The klaxon cut across the evening like a cold wave. They had been in orbit of Trill for less than a full day, and were secure in the safety of their position. The clarion call was…

» Talking with the Captain

after breakfast, Simon had been helped by Eva back to the sofa, as he found it frustrating enough being blind as a bat and having to keep asking Eva for everything, What ne needed was those Ocular implants. He said," Computer Contact the Captain,"

Alejandro took the basketball in hand and stared down his defender as the rest of his team got into their offensive maneuvers. He looked back at the all pro defender Joe Dumars who had been one of the greatest defenders in his day. He kept his dribble going looking for…

» For the Bailey family. (backpost before taking up present post)

Todd sat in his quarters, staring at the computer terminal. His breathing was slightly fast and with an unsteady hand he swept his hair back as he said "Computer, open personal log and record in the event of..." and he stopped talking, feeling the enormity of what came next "...in…

I am logging this as the Victory is barreling towards a rendezvous with the Dalacari and Ts'usugi in order to mediate a dispute. Apparently, a disagreement concerning the possible development and use of an Artificial Intelligence has the two in a quarrel. The use of such…

It's fair to say that this mission to Niron 5 and the Presidium Shipyards has not gone as we had hoped for. The Station is in complete disarray following the accident in her Engineering Section. Debris is slowly entering the atmosphere and…

Memories and recollections can be both sweet and sour, causing you to have the extreme feelings of being either totally elated or wishing the universe would end right now so you no longer carry the pain. Over the last few weeks, that's come more and more into focus in my…